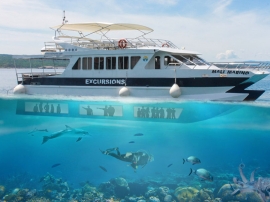 Boat excursion from Crikvenica to island Krk (Vrbnik)
Departure from port in Crikvenica at 09,00 h
Welcome drink on the boat
Riviera Crikvenica - Dramalj - Kacjak - Silo - Vrbnik
Vrbnik is typical old Mediterranean city situated on the 48 meters high cliff with population about 1000 people. First time mentioned in 12 th century. Vrbnik is famous spiritual center with many churches inside city walls. Town is characterized by narrow streets, so it is no wonder that the narrowest street in the world is situated precisely in Vrbnik. Besides buildings (parish church and Chapel of Saint John the Baptist) history of Vrbnik is noted in old glagolitic scripts and documents situated in parish church and library Vitezic with more than 10 000 books.
Arrival in Crikvenica at 14.00 h

Rijeka city with visit Theatre IVAN pl. ZAJC
Rijeka is the administrative and cultural centre of the Primorje-Gorski kotar County and the third largest city in Croatia with regard to the number of inhabitants. The city is situated along the course of Rječina River and nearby numerous streams. It lies on abundant sources and confluences. Like numerous cities in the world, Rijeka carries the symbol of water in its name.
Theatre - The tradition of the continuous theatre life in the city of Rijeka is more than two centuries long. The first theatre building was completed in 1765, however, as it also served other purposes, the construction of a new theatre was initialized at the end of the 18th century. The new theatre was finished and opened for the public by a distinguished citizen and merchant Andrija Ljudevit Adamić in 1805.