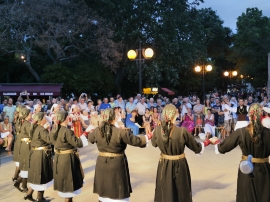 International folklore and dance festival - Summer in Adria Music Festival 2015
14.08.-17.08.2015.
Performances: 15.08. in Krk and 16.08. in Baska
Each group has guranteed two performances.
Accommodation in hotel complex 2 ** including breakfast and dinner

About location:
Krk
The Town Krk is the administrative and political centre of the island of Krk in Croatia. The city is ancient, being among the oldest in the Adriatic. It has been continuously inhabited since Roman times. According to last census in town Krk live almost 6000 people. With many restaurants and bars city is today center of the island night-life

Baska
Baska is the best known tourist resort on the island of Krk, the Adriatic’s biggest island ( 40.578 ha). Krk’s position in the northern part of the Croatian Adriatic makes it the closest island to Central Europe. Baška’s favourable location has ensured its continuous growth and prosperity, as well as a distinctive place on the tourist scene, making the town one of the most popular tourist destinations on the Adriatic.The town is located in a gentle valley and in a bay surrounded by vineyards, olive groves and flowering broom, with a picturesque background of the rocky mountains of Velebit and the islet of Prvić, which seem to shelter its unique 1800 m long pebbly beach, justly said to be one of the loveliest in the Adriatic.

About festival:
Participants: Folklore groups, Orchestras, Majorettes, Modern dance groups, Choirs, Music bands from all over the world, Choirs who are able to perform on open-air stages. The number of the participants are not limited.No age limits. Number of seats are limited!Accommodation in hotels 2 **
Accommodation in single, double and tripple rooms.
- Photos - Archive Tourist board Kvarner