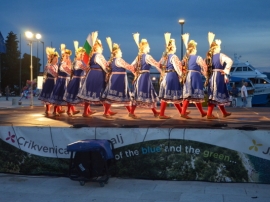 14.07. Town Krk
15.07. Senj
Each group has two performances.
Accommodation in hotel complex 2 ** including breakfast and dinner

Krk Town
On the island’s southern coast, Krk Town clusters around an ancient walled center. The newer part of town spreads out over the surrounding hills and bays, and includes a port, beaches, camping grounds and hotels. The seafront promenade can get seriously crowded in summer with tourists and weekending Croats, who spill into the narrow cobbled streets that make up the pretty old quarter.
Minus the crowds, this stone labyrinth is the highlight of Krk Town. The former Roman settlement still retains sections of the ancient city walls and gates, as well as a grand Romanesque cathedral and a 12th-century Frankopan castle.
You won’t need more than a couple of hours to see these sights, but from a base in Krk Town it’s easy to explore the rest of the island.

Senj
Senj is a historic city in the northern Adriatic Sea at the foot of the slopes of Velebit and Kapela in the Velebit Channel. A town with a heroic past, it is recognisable by two symbols – the Senj bora wind and the historic fortress of Nehaj on the hill above the town. Its past speaks from every stone, the historic old town centre, the towers, the city museum...
Clean sea, beautiful beaches and many entertainment events such as the winter and summer carnivals and a'cappella festivals make it an attractive tourist destination. In the vicinity of Senj there is the Marian shrine at Krasno in the centre of Velebit National Park which is annually visited by a large number of mountaineers and faithful.

About festival:
Participants: Folklore groups, Orchestras, Majorettes, Modern dance groups, Choirs, Music bands from all over the world, Choirs who are able to perform on open-air stages. The number of the participants are not limited.No age limits. Number of seats are limited!Accommodation in hotels 2 **
Accommodation in single, double and tripple rooms.