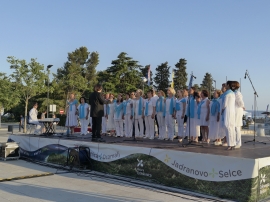 III. FESTIVAL SUMMER IN KVARNER
International folklore and dance festival
01.06.-04.06.2017.
Performances: 02.06. in Baška and 03.06. in Crikvenica
Each group has two performances.
Accommodation in hotel 2 ** accoding to availibilty including breakfast and dinner.

About location:
The Kvarner Riviera is located next to Istria (along the Croatian coast) and is centered around the city of Rijeka, which is the busiest port on the Adriatic. The most famous resort in this area is Opatija, with Lovran, Crikvenica, Kraljevica and Novi Vinodolski also popular. The islands of Krk, Losinj, Cres and Rab are also considered to be part of the Kvarner region.
The participants of this festival can present their performances in this beautiful surroundings in Croatia in front of many local people and visitors of the city of Crikvenica and Baska, and nearby.

Baška
Baška is one of the best known tourist resort on the island of Krk, the Adriatic’s biggest island ( 40.578 ha). Krk’s position in the northern part of the Croatian Adriatic makes it the closest island to Central Europe.The town is located in a gentle valley and in a bay surrounded by vineyards, olive groves and flowering broom, with a picturesque background of the rocky mountains of Velebit and the islet of Prvić, which seem to shelter its unique 1800 m long pebbly beach, justly said to be one of the loveliest in the Adriatic.

Crikvenica
In addition to beautiful natural surroundings, crystal clear seas and fresh air, and traditionally hospitable people, one of the main reasons for choosing Crikvenica for your holidays is the area's balmy, stable and healthy Mediterranean climate and microclimate. The winters here are mild, the summers are warm yet not too hot – the ideal conditions for the development of health tourism here more than one century ago. The area's long, sand and pebble beaches, with numerous play areas for children, are all connected by a footpath through its lush Mediterranean vegetation.

About festival:
Participants: Folklore groups, Orchestras, Majorettes, Modern dance groups, Choirs, Music bands from all over the world, Choirs who are able to perform on open-air stages. The number of the participants are not limited.No age limits. Number of seats are limited!